Learn why some automations do not work as expected when they are not provided with sufficient data.

When you create an automation in Thrive Automator, you are able to choose between a variety of different actions.

In some cases, it might happen that the automation you have set up is not giving you the expected outcome.

This might happen because of the correlation between the start trigger and the action about to come.

When you set up a start trigger that uses certain information about the user/visitor, the action(s) that comes next should be created in such a way that the triggers and actions are using the same data.

For example, if the start trigger you have set up is the "Form Submit" one, that means that the automation will receive the user information that they have added to the form. 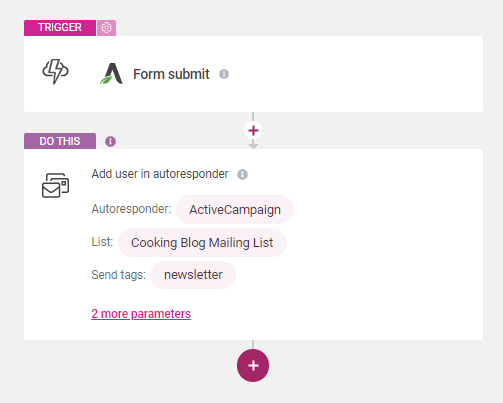 However, if the start trigger that you have set up is one that does not necessarily require specific information from the user, but the action does, the automation might skip the action since the data is unavailable.

For example, for the "User completes quiz" start trigger, the users can skip the form, so if the next action is the "Add to autoresponder" one, the automation might not have the needed data to perform that (for the users that haven't completed the form).

In this case, the action will be skipped and the automation will continue from the next step.

These are some examples of situations in which the automation might not work as planned due to this lack of data exchange between the start trigger and the set action.

The vast amount of automations you can create will also imply a higher number of possible unavailable actions.

Hence, the most important thing to keep in mind here is to always pay attention to the workflow that you have created and ensure that the data required by both the trigger and the action is identical.

Hopefully, this article was helpful to you. Make sure to check out our entire Thrive Automator section from our knowledge base, if you want to learn more about this plugin.