What are the common issues that might stop your Thrive Ultimatum campaign to be triggered when using a third party event.

In case you're trying to use the "3rd Party Event" trigger type in Thrive Ultimatum (formerly known as "Incoming Webhooks"), here are some things to check off your list in case the setup is not working:

→ Make sure the Thrive Ultimatum campaign is running

As silly as it sounds, if you're setting up a new Thrive Ultimatum campaign, you might have the feeling that you're all done after setting it up. However, sometimes it might just slip out of your mind that you also have to start the campaign.

So, in case the entire flow with one of the autoresponders is correctly set up, but still, the campaign is not triggered, have a look and see if the campaign is running:

→ Make sure the automation is active/running

Usually, the webhooks can be triggered inside an automation created using the autoresponder of your choice.

After creating the automation, and making sure that the flow is correct, you will have to set it to "Active".

Again, this can be an obvious step, but it's important to check it, even more so because some of the autoresponders will automatically turn the automation off if you modify anything to it.

For this reason, if the setup is not working, you should always double-check if the automation is active.

→ If you're testing the flow, do it in Incognito

Once you've set up the flow of your choice, you can, of course, test it out. Sometimes, things don't seem to work, but that can be caused by browser caching.

Because of this, we recommend testing out the flow in Incognito mode.

→ Check the parameters of the promotion page

The promotion page is the one where you direct your users to, and the one on which the Thrive Ultimatum campaign will show.

If you want to include it in one of the emails sent in the automation, you'll have to be careful which promotion page URL you add to the email.

For example, let's say the URL of my promotion page is this one:

When I set the lockdown settings for my campaign, I will have to add the promotion page here:

When you do so, the URL of the promotion page will be generated here:

The URL will have a slightly different structure:

This will be the URL to be added to the email, instead of the regular URL of the page.

This one applies when you're using a "Lead Generation" element to allow the users to sign up/subscribe to your site, but they are not added to your mailing list once they do so.

This can be caused by other issues, as well, but make sure you first refresh the mailing lists, using this option, of the "Lead Generation" connection pop-up: 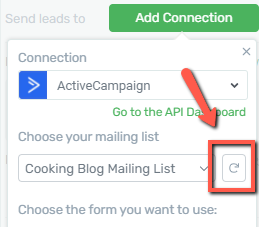 If you need help setting up the "3rd Party Event" trigger type, here are some resources that might be useful to you:

Hopefully, this article helped you create the setup. However, if you're still experiencing issues, don't hesitate to open a support conversation.