How to Choose a Winner and What Happens Next

With Thrive Leads, you can test the different forms you have built against each other to see which one is worth keeping on your site for later use, in other words, which is the winner form. That is, which one attracts most users and turns them into potential customers.

You can set that the winner will be automatically chosen with Automatic Winner Settings. It means that after you have given certain criteria, the test will stop by itself and will choose a winner as soon as the results fulfill them.

You can also stop a test manually when you see definite results on the test chart and data table, which you can find on the test's page while it is running.

Here is an example on a test chart where 3 different types of forms are tested against each other: ​

As you can see, the conversion rate of the orange form is much higher than that of the other forms.

You can also see the current results on the data table: 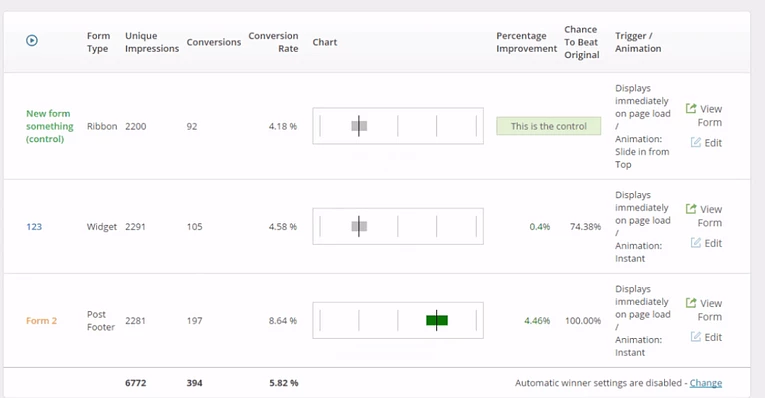 Here again, the orange form looks like it is winning: the chance to beat the original is 100%

If you want to stop the test manually and you would like to choose the winner already instead of letting the test run for longer, click on "Stop test And Choose Winner" as indicated by the red arrow:

As soon as you have chosen the winner, the test will be finished and you will be redirected to Thrive Leads Dashboard with the following message:

As the text says in the image above, choosing the winner will automatically put all the other tested forms into the archive:

Following some of our recent updates, you could see slight changes in the design, and also new features were added, making the A/B tests more efficient and making sure that your website's traffic is not wasted on weak variations. You can find out more about this update by accessing the following link.